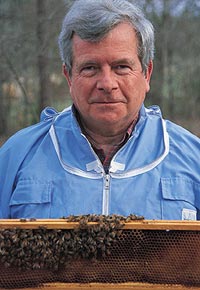 Dr. John T. Ambrose, our distinguished NCSBA President, passed away on January 8th after a short battle with cancer.

Dr. Ambrose was a long time faculty member and administrator at NC State University. He earned his MS and PhD degrees from Cornell University in Apiculture (honey bees) and Social Insect Behavior. He was also a retired US Navy Captain. He started work at NC State in the Dept. of Entomology as an Assistant Professor and the Extension Apiculturist in 1975, as well as being appointed as the Executive Director of the NC State Beekeepers Association. His research areas were apiculture (including bee diseases and parasites) and pollination. He was the recipient of NC State’s Outstanding Teacher Award, Member of the Academy of Outstanding Teachers at NC State, recipient of the Entomological Society’s Outstanding Teacher Award, and recipient of NC State’s Alumni Outstanding Undergraduate Teacher Award. From 2000-2012 he worked in a number of administrative positions in the Division of Undergraduate Academic Programs ranging from Director of the First Year College to Dean of the Division. Since 2012 he had been in Phased Retirement with his emphasis on teaching. His interests were apiculture, pollination, social insect behavior and the association of man and insects over time and today.

In 1982, Dr. Ambrose designed and established the North Carolina Master Beekeeper Program (MBP). Its purpose is to provide an infrastructure whereby beekeepers can improve their beekeeping skills and knowledge on a continuous basis within a system that objectively and formally acknowledges those accomplishments. It also serves as a means of providing valuable information to beekeepers and the public through various outreach services. Prior to 2011, the Master Beekeeper Program was run through North Carolina State University. Due to financial cutbacks, the program was cut. Because of the importance of the program to beekeepers, NCSBA agreed to pick up this program. Today over 10,000 beekeepers have participated in the program.